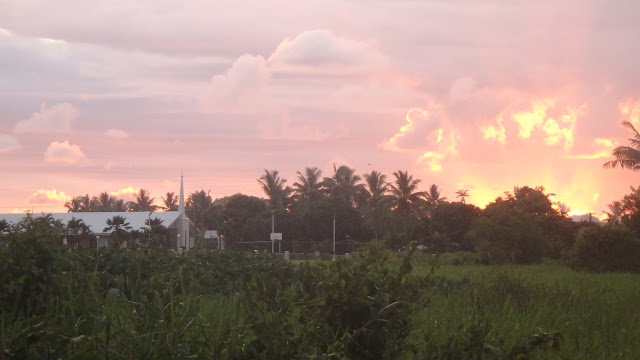 Just Keep Swimming (er... I mean walking)
Bula vinaka everyone!
Yet ANOTHER week has flown by! It's been pretty much the same ol' same ol' out here in Fiji. It's been a scorching hot week. We've been working really hard to improve the area! It's tough work, but we just keep on trudgin' through!

My companion and I have been working really hard to find some more people to teach. We're going literally door to door until we've knocked on every single one in our area! There are only 3 villages and a few other random settlements so it honestly won't take that long! But the investigators that we DO have are doing well. We have a baptism scheduled for next week! I hope everything works out! She's an awesome lady, and has a strong desire to be baptized. It's the sweetest feeling in the world when someone that you've introduced to the gospel testifies of its truthfulness. She already has amazing faith.

So, one embarrassing story for the week. Our area is not super developed, people live in tin houses still and everything. So only a few paces have paved sidewalks. When it rains, it gets REALLY muddy. (You can probably guess where this is going...) My companion, for some reason, is prone to slipping. I've had more than one laugh as he plummets down into the mud. I've been SUPER careful while walking to make sure it doesn't happen to me. One day, we had a dinner appointment at a members house. They're our neighbors, and one day earlier they needed to borrow some plates. So after the dinner appointment, they gave us our plates and said goodnight. I started walking away, and yelled out an inside joke as I left. They started laughing so I was feeling pretty good about myself when -WHAM- I end up face down in the mud. They're laughing turned into gasps of worry for a second, but when they realized that I was ok, it turned into HISTORICAL LAUGHTER. I was so embarrassed. I broke our plates. My clothes got covered in mud. My companion almost fell to the ground in laughter. Hahaha. Then I just started laughing at myself too. It was definitely a journal-worthy moment.

For a spiritual thought, my companion and I have a little saying that we tell each other, inspired from an MTC address by Elder Holland. If either of us are apprehensive whatsoever before going up to a door, or are feeling down about some fall-throughs, we just say "There's Someone a lot greater that went through this." It helps us to know that even though Christ was the Master teacher, he too was rejected by many. It keeps us going. If you too ever feel discouraged or stressed, just remember that someone a lot better has been through much worse, and He'll help you through it!

So yeah, that's pretty much our week! Thanks for tuning in! Until next week, keep on keepin' on!
Au lomani kemuni!

Posted by ElderJaxsonJeremyMiller at 11:59 AM